Special machines are part of everyday life and we are used to seeing them all the time. Many different types of vehicles fall into this category, such as fire engines, ambulances, hearses, utility vehicles, etc. 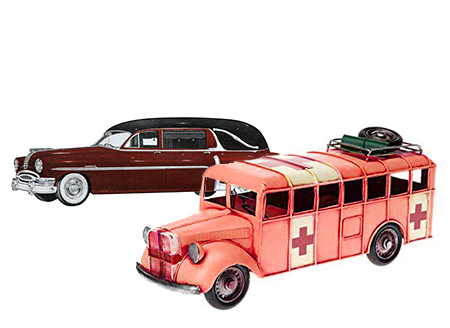 The funeral hearse has come a long way since it was just a hand-drawn vehicles and later horse-drawn wagons. In the early 1900s, electric-powered hearses were produced in the U.S., The first funeral car with a petrol engine was built in 1907. They became popular a decade later. Over the years, hearses became bigger and many companies started building them, and hearses today are state-of-the-art machines with a special design.

Ambulances were used for the first time in the 15th century for military purposes, and civilian horse-drawn ones became popular in the mid-1830s. The first hospital service including ambulances was set up in 1865 in Ohio, USA. Many cities in the U.S. and Britain adopted ambulance wagons and emergency call services. John Lumsden set up an ambulance service in Ireland in 1910. Soon, ambulances became much more advanced than the simple wagons they were. Gas, steam and electricity were used as the main power sources. The 1905 Pallister was one of the first to be produced, followed by several Straker-Square models. Dodge and Austin models were used as ambulances in the WWII period. After the 1950s, ambulances were equipped with many life-support and CPR systems and were not used only for transportation anymore. Vans and trucks were widely used as ambulance chassis in the 1970s, and the stretcher was added to their equipment. Modern machines’ equipment even includes winches, tail lifts for patients and ramps. Paramedic teams use heavily-equipped machines to respond to emergencies.

The Introduction of Patrol Cars

Patrol and police vehicles vary depending on the purpose they are used for. There are pursuit and traffic control vehicles, as well as special purpose cars and vans. The first ever police car was used in 1899 in Ohio and it was an electric one, built by Frank Loomis. Later, Ford’s Model B became the first mass-produced police car. It was preferred for its strong V8 engine. Later, all the biggest car manufacturers in the U.S. began producing police cars.

Fire engines are among the most important specialized machinery. The first fire-fighting vehicle was designed by Joseph Jenckes Sr. in 1654, followed by Richard Newsham in 1730 in Britain. They were nothing but carts with manually operated pumps mounted on them. Engines were introduced in 1822 and the fire engine was improved. A self-propelled steam-powered machine was shown in 1841. A gas-powered fire truck was shown by the Knox Automotive company in 1905. Later, turntable ladders were introduced, which were mechanically extendable. Fire engines became bigger and faster. In the 1960s, smaller trucks with fire-fighting equipment were introduced.

There are many different military vehicles that are specialized for different purposes. Among the most popular ones are the utility vehicles, which originated from four-wheel drive civilian models such as the Willis Jeep and the first Land Rover models. Some models were designed for military purposes, such as the VW Kubelwagen. There are many different versions of military vehicles, including amphibious models, trucks, service vehicles and machines equipped with tracks instead of wheels. There were close to a million units of these vehicles used only during WWII.

The Variety of Utility Vehicles

Utility vehicles come in all shapes and sizes. There are different ATVs and UTVs used for commercial purposes, and there is also a variety of service vans and trucks, like road assistant machines, emergency rescue trucks, snow removal machines, all-terrain multipurpose four-wheel drive vehicles and many more. Service and utility vehicles’ history dates back to the moment the first regular vehicles became popular. When passenger cars and trucks became a mass means of transportation, the need for their maintenance occurred, and with frequent mechanical fails and accidents occurring, road assistance machines were introduced as early as the beginning of the 1900s. The first service vans and trucks used a regular production vehicle with an additional platform in the back, containing different tools and accessories.

Tank trucks were introduced in 1914, and the first ones were used for transporting food products like milk. The technology was improved greatly over the years and we have semi-trailers with high-capacity tanks today.

Some of the other special vehicle categories include mobile self-propelled and truck-mounted cranes, as well as garbage collection trucks, taxis (which were here long before the internal combustion engine – Frenchman Nicolas Sauvage offered them in 1640), postal and courier vans, dump trucks and mobile workshops.